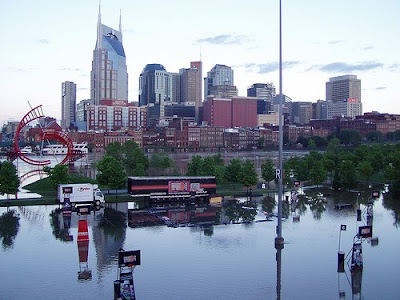 "If you live outside of Nashville, you may not be aware, but our city was hit by a 500-year flood over the last few days. The national news coverage gave us 15 minutes, but went back to focusing on a failed car bomb and an oil spill in the Gulf of Mexico. While both are clearly important stories, was that any reason to ignore our story? It may not be as terror-sexy as a failed car bomb or as eco-sexy as an oil spill, but that's no reason to be ignored.

The Cumberland River crested at its highest level in over 80 years. Nashville had its highest rainfall totals since records began. People drowned. Billions of dollars in damage occurred. It is the single largest disaster to hit Middle Tennessee since the Civil War. And yet…no one knows about it.

Does it really matter? Eventually, it will…as I mentioned, there are billions of dollars in damage. It seems bizarre that no one seems to be aware that we just experienced what is quite possibly the costliest non-hurricane disaster in American history. The funds to rebuild will have to come from somewhere, which is why people need to know. It's hard to believe that we will receive much relief if there isn't a perception that we need it.

But let's look at the other side of the coin for a moment. A large part of the reason that we are being ignored is because of who we are. Think about that for just a second. Did you hear about looting? Did you hear about crime sprees? No…you didn't. You heard about people pulling their neighbors off of rooftops. You saw a group of people trying to move two horses to higher ground. No…we didn't loot. Our biggest warning was, "Don't play in the floodwater." When you think about it…that speaks a lot for our city. A large portion of why we were being ignored was that we weren't doing anything to draw attention to ourselves. We were handling it on our own.

Some will be quick to find fault in the way rescue operations were handled, but the fact of the matter is that the catastrophe could not have been prevented and it is simply ignorant beyond all reason to suggest otherwise. It is a flood. It was caused by rain. You can try to find a face to stick this tragedy to, but you'll be wrong.

Parts of Nashville that could never even conceivably be underwater were underwater. Some of them still are. Opry Mills and the Opryland Hotel are, for all intents and purposes, destroyed. People died sitting in standstill traffic on the Interstate. We saw boats going down West End. And, of course, we all saw the surreal image of the portable building from Lighthouse Christian floating into traffic and being destroyed when cars were knocked into it. I'm still having trouble comprehending all of it.

And yet…life will go on. We'll go back to work, to school, to our lives…and we'll carry on. In a little over a month, I'll be on this website talking about the draft. In October, we'll be discussing the new Predators' season with nary a thought of these past few days. But in a way, they changed everyone in this town. We now know that that it can happen to us…but also know that we can handle it.

Because we are Nashville."